A Very Short, Fairly Interesting and Reasonably Cheap Book about Coaching and Mentoring by Bob Garvey.  Reviewed by Julie Hay

Researching Gender by Christina Hughes.  A brief introduction to Sylvia Farley's review to appear in the next issue of  Nurturing Potential

Dutch - Biography of a Language  by Roland Willemyns.   A brief introduction to Joseph Sinclair's review due to appear in the next issue of  Nurturing Potential 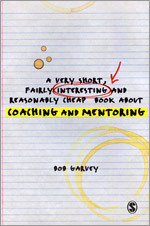 This has not been an easy book to review!  In essence, I think the title is only half right – it is a short book, it is fairly interesting and it is reasonably cheap.  However, it is about a particular perspective on coaching and mentoring – that of an academic who sets out to provoke us to consider the discourses about them, and particularly how these discourses are influenced by commercial considerations.

Garvey begins by stating that the book is intended “to stimulate and provoke debate” (p.1) and it certainly did that for me:  there were several places where I wanted to challenge (in a way that would belong in a debate but not within a book review so I have resisted the temptation to do so here).  He also comments that he wants the reader to “feel stimulated, inspired, provoked, irritated or cross” (p.1) and with me he certainly succeeds.  I was relieved to read a few pages on that he knows he might “be viewed as a likeable if grumpy old academic” (p.6) because that is just what I was thinking by then,  although by the end of the book, I had shifted from irritated to provoked.

What Garvey goes on to provoke the reader to consider is the importance of developing a critical perspective towards coaching and mentoring.  To assist us in this, he offers a unique brief history of both approaches in which he tracks mentoring back to Homer’s Odyssey and then 18th century Europe, whereas coaching references go back no further than the 19th century England because Garvey challenges the connection to Socratic dialogue.  He describes how current mentoring has a career sponsorship theme in the USA and a more developmental style in Europe, whilst coaching emphasises performance and achievement.

He goes on to consider the ongoing debate about definitions of coaching and mentoring, challenging both the Dublin Declaration (Mooney, 2008) and the European Mentoring and Coaching Council (EMCC).  (Although he does not recall that EMCC policy formed at my suggestion in 2003 and still there on the EMCC website e.g. within the Code of Ethics, is to use the term coach/mentoring to remind people that so many different definitions exist).  As Garvey points out “while a consensus offers clarity for the majority, it can disempower or downgrade the minority as the majority view holds sway.  Definition in social activities such as mentoring and coaching, if informed by a consensus view, therefore becomes a diversity issue” (p.23).  He goes on to quote (Layder, 1994): “… it is important to understand that language is never ‘innocent’; it is not a neutral medium of expression.  Dinosaurs are expressions of power relation…  For instance, command of a particular discourse allows control over those who do not… [have such command]” (p.29).

Garvey continues the theme on discourse into considering three possible positions:  traditionalism, as in there is an answer in history that creates a sense of security; reflecting or re-writing history; or building on the past by understanding it.  Unsurprising, he recommends the third position and critiques a variety of existing definitions on that basis.  This leads in to more comments on power dynamics, although the example he quotes where an HR Manager sought to pressurise an outside coach to reveal information left me questioning why the coach had not anticipated such an issue and contracted in advance accordingly.

Chapter 4 focuses on whether we need skills and competencies to measure coaches and mentors against, and how the “rational pragmatic manager” and “achieving results through people” (p.52) militates against “developing their human potential to the full” (p.51).  Garvey writes that competency frameworks are rarely challenged, even though they overlook the significance of relationship over models or techniques.

Returning in Chapter 5 to earlier comments about coaching being focused on performance whilst mentoring is often seen as developmental, Garvey provides an analysis of references to Performance & Goals compared to Learning & Development in the literature 1983-2010.  This shows that the links between coaching and goals was slight until 2000-2010; before that it had been largely linked to learning and development and this continued from 2000-2010 so that it was equal to the newly-increased performance and goals focus in that period.  Mentoring literature, on the other hand, remained founded on learning and development 1983-2010, with an increase in 2000-2010 but still little on performance and goals.

Chapter 6 reviews the discourses related to psychology, with coaching literature seemingly far more concerned than mentoring literature.  Garvey refers to various psychological and therapy based approaches, including psychodynamic, humanistic, and with particular criticism of the positive thinking stance that Garvey attributes to positive psychology.  He also challenges what he calls a curious generalisation that coaching is proactive whereas therapy is reactive.  When reviewing the mentoring area, Garvey finds that there is more research available, and also that the literature indicates the development psychology domain rather than the psychotherapeutic.  He goes on to reference Bruner (1996) on the need use both logical-scientific and narrative thinking, without seeming to recognise the link to the ‘meaningful life’ emphasis in positive psychology.

Garvey’s concluding chapter pulls together the themes, which I think are best summarised by his sub-headings with my comments added:

My own conclusion is that this book provides useful information and highlights significant aspects for consideration.  I had anticipated, from the title and the cover, which looks rather like an old-fashioned, home-made book of recipes (fake handwriting font and fake coffee cup stains on it) more of a practical, how-to-do-it book.  It is certainly not that.  It will, however, appeal to those with an academic interest in coaching or mentoring and to anyone considering a research study (about anything, as the ideas can be applied to much more than coaching and mentoring).

Finally, the book includes the usual publicity information about Bob as “one of Europe’s leading academic practioners… [who] has influenced policy, practice and productivity… current clients [well-known organisations].  I see this as an interesting discourse that establishes his power and ironic in that he challenges us to consider the impact of discourse and power. 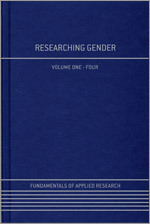 In “Researching Gender”, Christina Hughes brings together 79 learned papers on Feminist thought about such diverse matters as the experiences of women of colour, sex workers, Internet game players and Social Science researchers, quoting such diverse authorities as Freud, Derrida, Butler and Karl Marx in addition to dozens of contemporary feminist researchers.

This daunting tome of 4 volumes, 79 chapters and over 1500 pages discusses feminist positions on various aspects of gender in a deliriously eclectic manner, ranging through several decades and across many cultures and geographical locations as well as hyperspace and quantum theory.

Discussions  are offered on topics ranging from epistemophilic approaches relating male and female drives to bodily functions, i.e relating a hunger for learning with the urge to explore sexuality, and contrasting male and female attitudes to research, the masculine being conceived as positivist, replicable experimental data and the feminine as more experiential, ethnographic and emotional. They cover many forms of research and many purposes, seeking both to explain and to promote social change. Christina has deliberately avoided ordering the articles by date or topic in order to encourage readers to dip into the four volumes at random and make their own connections.

My romance with language - and particularly the acquiring of foreign language facility - has existed almost as long as I can remember.  Having spent several years living in the German-speaking region of Switzerland (where a knowledge of high-German - i.e. the language of Germany - was of more hindrance than help in dealing with the hubris of citizens determined to defend their own variety of German against the incursions of the neighbouring tongue), I then transferred to the Netherlands, and found myself confronted by a language that not only bore confusing resemblances to both German and English, but was clearly influenced by other languages, such as French.  Furthermore, when travelling in Belgium, I had to face a similar proud insistence by the Flamands (that their language was absolutely NOT Dutch, but Flemish) to that which I had earlier encountered in Switzerland.

So, when I learned that OUP was offering Roland Willemyns' book for review, my hand immediately shot skyward.  And, in giving it a cursory study prior to a full reading, I was delighted to note that many of the questions I had been asking during my sojourn in Holland, were dealt with in very satisfying detail in this book.

I hope I will succeed in conveying my excitement at these discoveries in the full review of this book that is scheduled to appear in the June 2013 issue of Nurturing Potential.

Julie runs transactional analysis programmes in the UK, Poland and Russia, previously in Turkey and the Ukraine, and elsewhere on an ad hoc basis, for those seeking international professional certification in transactional analysis.  She also leads an MSc Professional Development (Developmental Transactional Analysis) and expects soon to add an MSc in Developmental- Supervision and an MSc in TA Training.  Julie is a past president of the international and European TA associations, was a vice chair of the UK ITA and inaugural Chair of the UK IDTA. 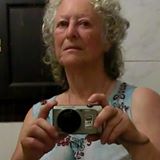 I have been a sufferer from Multiple Sclerosis since I was 14 years old, but have lived and worked from the Arctic to the Equator, originally as a horticulturist, (UEI, CDH, RHS) raised a family, had 4 husbands, 3 children including an autistic son, a near-death experience, seen ghosts, met con-men, been deserted, told fortunes, sung in clubs and appeared on Radio and TV, written prize-winning books and poetry, sailed thousands of miles fund-raising, learned several languages including French, Swedish, Finnish and Chichewa, obtained a BA Hons in Psychology and an MSc in Social Science Research and maintained a free self-esteem counselling web site - now defunct.

My MSc dissertation was on alternative sexuality, an ethnography researched as a participant-observer for 10 years in my 50s-60s.

At almost 70 years old, I have now moved to Catalonia in Spain where I am currently resident, learning 2 new languages, Spanish and Catalan, and can live frugally but comfortably on my state pension, supplemented by the organic fruit and vegetables I grow on my riverside smallholding.