The Origins of Neuro-Linguistic Programming edited by John Grinder and Frank Pucelik.  Reviewed by Joe Sinclair 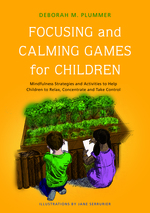 As someone who works therapeutically with children and young people I was attracted by the title of this book, as I think anybody would be who works in education or health.  I have always been enthusiastic about using games in an educational context and like the author am a fan of such books as ‘The Gamesters Handbook’, one of a number of books referenced by the  author. As Plummer says in her introduction, many of the games contained in these pages are recycled from earlier material – and there is nothing wrong with that. As an ex-teacher I have observed there has been a shift over the course of the last twenty five years or so away from child centred education toward school- management centred education which increasingly seems to exist to provide the Government of the day with dubious ‘evidence’ of academic progress. The result seems to be stressed teachers, stressed parents and stressed children.

This book emerges in the context of an ever increasing pressure on children and families, a pressure that is exacerbated by the explosion in media availability which further erodes children’s ability to focus and really notice what is going on around them. Plummer rightly emphasises the importance of social interaction; the games encourage this to happen with real, solid  people, rather than in the two-dimensional realm of cyberspace.  It is an antidote to what many describe as a somewhat toxic twenty-first century experience of childhood and as such it is to be welcomed.

The book is divided into two sections: the first comprising theoretical and practical background.  As a social constructionist I am aware of the importance of context and the author spends time on explaining how to create the optimum environment in which to practice the activities and exploring the concept of ‘mindfulness play’.  Little nuggets of intrigue abound; I was very interested in, for example, a reference to the pre-frontal cortex and its importance in self – regulation and was prompted to explore this further (in cyberspace!). This section is well structured and referenced providing a sound ‘evidence base’ for the activities.

The latter part of the book describes the games and activities themselves and is structured in five sections which include warm-ups and ice-breakers and games that develop the ability to concentrate for longer periods. Each game is given a ‘time’ and pointers toward the specific skills it develops, using a handy visual key. There is a list of games at the front for easy reference.

As I said at the start of this review,  a lot of the games and activities are not new but they are all the stronger for it. Play has always been central to childhood as encouraging social interaction and developing sensory awareness; we need to bang the gong for books such as this. Let’s hope that our ears are still sufficiently attuned to be able to hear it. 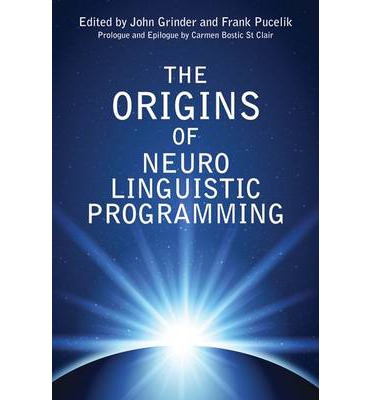 I have found this a very difficult book to review.

My instincts have swung ambivalently from pole to pole; from an initial gut reaction of “Why the hell hasn’t Richard Bandler contributed to this work?”; through "Why was it not sub-titled Therapist Treat Yourself!?"; to believing it might profitably be recommended to all readers who want a “rounded” view of the phenomenon that is NLP.

To the extent that I believe it is possible to learn as much – if not more – about a subject from the petty bickering and disputes indulged in by its practitioners, as from the more prosaic and academic works they produce and edit –so to speak – with their public faces hagiographically on display, readers will have their eyes well and truly opened by this book.  (To say nothing of their ears being well and truly bent, and their senses decidedly titillated.)

In defence of which statement, I would direct your attention simply to Grinder and Pucelik’s “sidebar” to Richard Bandler that precedes the Contents page [it starts: "Your voice is not here, only echoes of it . . . "], and Grinder and Dilts’s brief exchange on pages 171 and 173 [where Grinder comments on his failure to comment on Dilts's article, and Dilts comments briefly on Grinder's non-comments].  Now which NLP presupposition, I find myself wondering, does that most closely exemplify?

If you want to know how NLP is supposed to work, just consider these examples (and the several others that I have not drawn attention to) of how leading practitioners of this amazing tool for effective communication, are apparently unable to make effective use of it in their own lives.

I have no intention of regurgitating a situation that deserved to be put to rest many years ago – despite the efforts of some pundits, who might have been thought to know better – to keep it “alive and kicking”.

But I still want to admit to a feeling of sadness and loss that one of the two names that were synonymous with neuro-linguistic programming when I was first introduced to it is missing from editorial attribution.  Nevertheless I am, at the same time, delighted to see the dedication to Richard Bandler by editors John Grinder and Frank Pucelik, and it is equally reassuring to note that Bandler was offered the opportunity to contribute, but declined.

Editorial modesty has been a hallmark of Nurturing Potential’s ethos from its inception.  For a change, however, I propose to indulge in a slight case of editorial hubris in my review of this book.  In writing and publishing my own An ABC of NLP I stated that it was intended to bridge a chasm that resulted from the slippage between the language of NLP and the message it sought to convey. I think that many of the articles comprising The Origins of NLP provide a good demonstration of this belief.

I do not agree with some of the comments by contributors to the frontispiece of the book that this is a welcome addition to NLP literature for students of the subject.  I think it is rather a book for the “old hand”  for whom, indeed, it is an indulgence, just as for the writers it is a self-indulgence.  This  is not a negative criticism (and this comment, in itself, is not framed in the NLP presuppositional jargon that tells me all feedback is positive!) but is intended as positive applause.

Such old hands will find much of interest in the reflections of well-known NLP adherents such as Carmen Bostic St Clair, Judith DeLozier, Byron Lewis, Stephen Gilligan, Robert Dilts and others.  Most of them enhanced or marred (depending on your personal belief system) by the subsequent commentary on each by John Grinder.

My principal concern, however, is with the masturbatory nature of many – I might almost say “the majority” – of the contributions to this book.  Of course, this may be precisely what will appeal to most of its readers. 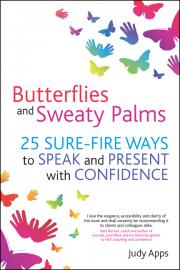 I was a self-help junkie.

Maybe I still am.  Maybe that is why I asked Crown House for a review copy of Judy Apps' book.

But with dozens of personal growth and self-help books lining my shelves and filling boxes in my garage, it would have to be a very special work to grab my interest and - even more relevant in this context - to transfer such interest to readers of this review.  So, before introducing any negative notes, let me tell you what there is about Butterflies and Sweaty Palms that might encourage you to part with your cash.

It is well written.  It addresses its subject-matter - the provision of techniques whereby the reader might speak confidently in public - with verve and enthusiasm.  It is liberally assisted by pertinent cartoons and illustrations.  It features quotations, side-bars, case studies and exercises that are interesting, relevant and helpful.

All in all, therefore a book that might do more than grace the bookshelf of a self-help junkie - self-confessed or otherwise - but will provide an effective tool for those readers who actively desire to improve their presentation and enhance their public speaking skills.

Now for the negative note.

With the hundreds of self-help books that are already available, it might be pardonable to ask: why bother to publish another one?  [Which may be something of an impertinence from one who was himself guilty of such a sin (1)] After all, it is less than one year since the death of Susan Jeffers, whose Feel the Fear and Do It Anyway has been selling for more than 25 years and has reached millions of readers.  Of course Dr Jeffers' book is directed to a more general readership than speakers and presenters, but most of its techniques and suggestions are not vastly dissimilar from Judy Apps's.

Much the same could be said of, for instance, the books of Wayne Dyer, Dale Carnegie, Eckhart Tolle, Deepak Chopra and many, many others.  (Actually, the daddy of them all, Self Help by Samuel Smiles dates from 1859 and a copy - not a first edition! - still graces my shelves.)   But perhaps the main justification of the book under review is evidenced by its Bibliography section, which doesn't even give a passing nod to Jeffers, but is overloaded with NLP recommendations.  And, indeed, NLP techniques are in evidence throughout this book.

Which is not an adverse criticism and, indeed, could alone provide a very compelling justification for publishing the book.

So, there it is.  Whether you're a junkie of the self-help or the NLP kind, or simply someone who wants to discover a series of techniques (25 of which are guaranteed to be "sure-fire"), then Judy Apps's book may be for you.

Mark Edwards lives in Exeter and works as a Primary Mental Health Worker in South Devon.  He has a developing interest in working systemically and the focus of his work is with children and families.  He runs a successful course for parents on Managing Challenging Behaviour

Joe Sinclair is Managing Editor of New Nurturing Potential as well as the publisher of Potential Unleashed.  He is the author of nine books including An ABC of NLP.